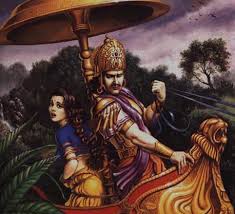 Jayadratha was a king of Sindhu, son of Vridhakshtra. He was married to Duhshala, the only daughter of Dhritrashtra and Gandhari. Jayadratha's father had pronounced the curse, that the head of the person, who would cause the head of his son to fall on the earth, would burst into tiny pieces. His father, then retired to the forest, installing Jayadratha on the throne. Once when Jayadratha was on his way to Shalva, he passed the Kamyak forest, where he saw Draupadi and fell in love with her. Jayadratha sent a messenger to Draupadi. The messenger praised Jayadratha, talked of his riches and asked Draupadi to leave the poor Pandavs and become the wife of Jayadratha. When she rejected his request, Jayadratha grew furious and forcefully carried away Draupadi. The Pandavs had just returned from hunting, and when they came to know about the events, Bhim, Arjun, Nakula and Sahdeva immediately set out after Jayadratha, caught up with him, defeated him and brought him before Yudhisthira.

Jayadratha was then released by Yudhishthir and Draupadi, but not before Bhim had shaved his head. Feeling humiliated at this defeat, Jayadratha performed penance to please Shiv and obtained from him the boon that he would be able to vanquish all the Pandavs, except Arjun, once on the battle-field. In the battle of Mahabharat, Jayadratha took the side of the Kauravs. When Abhimanyu entered the Chakravyuh, it was he who blocked the entry of Yudhishthir, Bhim, Nakul and Sahdev, making use of Shiv's boon, and thus cutting off any help for Abhimanyu. On learning of Abhimanyu's death, Arjun vowed to kill Jayadratha the next day before nightfall, or to kill himself if he did not accomplish the task.

Jayadratha, immediately wanted to return to his kingdom, but the Kauravs, Karn and Shakuni told him that he had nothing to worry about as the whole Kaurav army would protect him on the battle-field. The following day, Arjun fought his way skilfully, through the battle-array, while Krishna guided his chariot through the army of the Kauravs, till he reached Jayadratha. A terrible battle took place, and just before nightfall, Krishna with his magic powers hid the sun. Seeing the sun disappear, everybody thought that it was dark, and rejoiced that Jayadratha had not been killed. In the rejoicement, the battle-array broke up and Jayadratha came forward. Suddenly, the cloud disappeared and everybody was caught off guard. Arjun immediately proceeded towards Jayadratha, and, on the advice of Krishna, Arjun severed Jayadratha's head in such a way that his head fell on his father's lap who was meditating. When the old man stood up, the severed head fell from his lap and the old man's head burst into a thousand pieces.