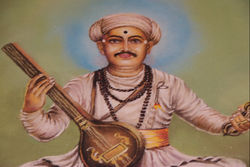 Tukaram was one of the greatest poet saints ever born in India. It is quite renowned for his contribution to the Bhakti Movement of Maharashtra. He was part of the egalitarian, personalized Varkari devotionalism tradition. Tukaram is known for his 'Abhanga' devotional poetry and community-oriented worship with spiritual songs known as kirtans. His poetry was devoted to Vitthala or Vithoba, an avatar of Hindu god Vishnu.

Tukaram was born in the small village of Dehu in the West Indian state of Maharashtra to Bolhoba and Kanakai a couple belonging to the lower Sudra class. His real name is Tukaram Vhilhoba Aambe. Rather, in accord with another tradition in India of assigning the epithet "sant" to persons regarded as thoroughly saintly, Tukaram is commonly known in Maharashtra as Sant Tukaram. He is known as Bhakta Tukaram to southern Indian people. He had two other brothers. Despite their lower class status the family was well to do and enjoyed good social standing in the village. Tukaram's troubles started with the illness of his father, due to which he had to start supporting his family at the tender age of thirteen. Shortly thereafter, both his parents died. Tukaram's problems only mounted; death of his family members and economic hardship seemed to plague him.[1]

Tukaram was married twice, his first wife Rakhumabai died in 1602 in her early youthdue to starvation during a famine, his second wife Jijabai or Avali as she was called, was much younger than his first had been and had little patience with his devotion and for God and she nagged him continuously. Sant Tukaram and his second wife, Jijabai had three sons: Santu or Mahadev, Vithobā, and Narayan.