Nandgaon is a town and a nagar panchayat in Mathura district in the Indian state of Uttar Pradesh. It popularly known as the birthplace of Hinduism and India's biggest God Lord Krishna. According to Indian beliefs, Nandgaon was the home of Lord Krishna where he resided from the age of seven to ten along with his Foster father Nanda Baba and mother Yashoda. Nanda Baba who was the village chieftain built his house here, atop a large hill, to protect Lord Krishna from the demons sent by King Kamsa. The royal palace of Nand Maharaj, the king of Braj, is situated in Nandganv. This village is a source of happiness because Shri Nand Ray (Nand Maharaj), Upanand, Abhinand, Sunand and Nandan all lived here.[1] 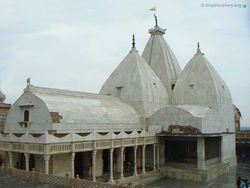 Nand used to sit here with his elder and younger brothers, as well as with the elderly gopas, priests and so on, to discuss Krishna's well-being. It is called a baithak because they would sit here together for discussions. Baithna means "to sit". Nand Maharaja has several baithaks in the eighty-four kosas of Braj Mandal. Wherever Nand Baba used to reside with his cows, gopas, gopis and others is called Nand Gokul and there used to be periodic meetings like this in those places. Thus, other such baithaks include Choti-baithana and Badi-baithana. The following pastime refers to this kind of baithak, or assembly.
Seven-year-old Krishna held Giriraj Govardhan for seven days on His little finger and thus smashed the pride of Indra. The astonished elderly gopas called an assembly. Upanand, the eldest brother of Nand Maharaj, was the chairman of this meeting to which Nand Baba had also been called. The elderly gopas expressed their opinion that krishna was not an ordinary boy. "Soon after taking birth, He killed the terrible rakshasi Putana, as if He were simply playing," they said. "Afterwards, He killed Shakatasur, Trinavart, Aghasur and many other demons. He subdued the terrible snake Kaliya and sent him out of Kali-dah. Just a few days ago, He held the huge mountain Giriraj on His little finger for seven days and saved Braj from the heavy downpour of rain and raging storms. These are not the activities of an ordinary boy. It seems to us that He must be a perfected, liberated soul, a demigod or Narayan Himself. It is not proper for us to consider Him to be the son of Nand and Yashoda, to chastise or threaten Him, or to address Him with words such as `thief', `wilful' and `impertinent'. Nand, Yashoda and the other gopas and gopis should always deal with Him lovingly and respectfully." All the gopas present heard this statement with much gravity and together they cautioned Nand Baba.
Nand Baba laughingly dismissed their words. "Respected gentlemen," he said. "I have heard your statements, but I do not see even the slightest demigod-like symptom in Him nor any symptom of supreme godliness. I have known Him from His very birth. Does Bhagvan feel hunger or thirst? This boy cries fifty times a day for bread and butter. Does Bhagvan steal and tell lies? This boy goes to the homes of the gopis and steals their butter, speaks lies and makes so much mischief. The neighbouring gopis play games with Him and make Him dance for a hand-full of buttermilk and a laddu. Whoever He is, He has taken birth in our home as our son; therefore, it is our duty to raise Him to become an ideal man of excellent conduct who possesses all good qualities. That said, there is one thing we should remember. At the time of Krishna's name-giving ceremony, Maharishi Gargacharya predicted that this child of ours would have qualities like those of Bhagvan Narayan. This explains everything."Assemblies were held to discuss Krishna's well-being, His betrothal and other such matters.

On the western bank of Yashoda kund is a place where Krishna performed childhood pastimes with His friends. Here, the brothers Krishna and Baldev became so absorbed in Their childhood games that They even forgot to come home to eat. Yashoda-maiya first sent Rohini to get Them, but as Rohini approached, Krishna and Baldev ran away, frustrating her attempts to catch Them. Yashoda then went herself. She would employ various tricks and, with great difficulty, bring Them home where she bathed and fed Them. Sometimes she told Them about a haua, or hobgoblin, and filled Them with fear. She would then catch Krishna in her arms and bring Him home. Once, Krishna insisted on seeing the haua,

"Maiya, I want to see the haua." The following Braj-bhasa poem tells this delightful pastime:


"`Do not go far away, my child, the haua has come.' Krishna smiled and asked Maiya who had sent him."

Even today, the stone figures of the haua here are a reminder of this sweet childhood pastime.

This place is situated west of Nandganv. During cow herding, Krishna played His flute on this hill (pahadi) to assemble His hundreds of thousands of cows. By the tender and sweet sound of His flute, this hill melted and became marked with the impressions of Krishna's footprints . Hence, this hill is called Charan-pahadi. On Kans's order, the great devotee Akrur came to Nand-gaon to bring Krishna and Balram to Mathura. When he saw Krishna's footprints on this hill and everywhere in the sand nearby, he became filled with ecstatic emotions, and began crying and rolling around on them. To this day, devotees become ecstatic upon seeing krishna 's footprints here.

Posts For Binding The Cows

Near Charan-pahadi are Rohini kund, Mohini-kund and a number of posts in a field for binding cows. This is the site of Nand Baba's cowshed. One can still see stone posts here. Brajvasi ladies worship these posts on special occasions.

Some distance north of Charan Pahadi is the kunja of Vrinda Devi. She resided here at the time of Krishna 's manifest pastimes. From here, she would arrange the meetings of Radha and Krishna in the kunjas of Sanket and other places. Sometimes, she would consult Yogmaya Purnima Devi and on her instruction arrange the meeting of the Divine Couple Shri Radha-Krishna by employing ingenious trickery. Here lies the pond of Vrinda-devi, in which she used to bathe and so forth. Vrinda Devi wears beautiful clothes, and is decorated with many kinds of ornaments. She is the presiding forest-goddess of Shri Radha-Krishna's pastimes in the kunjas. It is impossible for anyone to enter Radha and Krishna's pastimes without Vrinda-devi's mercy. Tulsiji is the worshipable form of the original Vrinda-devi. Krishna does not accept any offering without Tulsi leaves or manjaris. Near Vrinda kund, in the east, is Chaudokhara, which is also called Charan kund. Near this pond are Rohini kund Mohini Kund, the posts for binding the cows, Nand Baba's cowshed and Dohini Kund.

On the south-eastern bank of Pavan sarovar is the bhajankuti of Shri Chaitanya Mahaprabhu's associate Shri Sanatan Goswami. Sometimes, Shri Sanatan Goswami would perform bhajan here so as to remember the sweet pastimes of Nand-gaon, and sometimes he would go to associate with Shri Rup Goswami at his bhajan-kuti near Ter-kadamb. Shri Rup Goswami also used to come here to meet with Sanatan Goswami. Even today, many Gaudiya bhaktas in Shri Sanatan Goswami's disciplic succession come to this place to perform bhajan.
Once, in the forest here, Sanatan Goswami was very distressed in separation from Krishna. Restlessly crying for Krishna's darsan, he went without eating and drinking for three days. At that time, he had no bhajan-kuti here. Krishna came to Sanatan Goswami as a cowherd boy carrying some milk in a clay pot, and said, "Why are you here, hungry and thirsty? Nobody remains hungry and thirsty in this place. My mother saw you in this condition and has sent this pot of milk for you. You must drink it. I will return later and collect the pot. Listen, My mother has also said that since it distresses the Brajvasis to see you here in the forest like this, you should make a hut here and live in it." Saying this, the boy left. Sanatan Goswami drank the milk and immediately became restless with Krishna-prem. He cried bitterly, calling out, "O Krishna, O Krishna, You gave me darsan but also cheated me." Although remaining invisible to Sanatan Goswami, Krishna pacified him and had a bhajan-kuti built for him through a Brajvasi. Sanatan Goswami remained in this bhajan kuti, and performed bhajan. Nearby is the temple of Pavan bihari. The Brajvasis in the village bathe in this sarovar in the morning and then take darsan of Pavan bihari.

Nearby on the northern bank is a sitting-place of Shri Vallabhacharya where he recited Shrimad Bhagavata for one month. In the west of Pavan Sarovar is a kadamb-khandi, where the beauty of the kadamb trees is extraordinary. The bumble bees drink the nectar of the kadamb flowers and buzz about intoxicated. This kadamb-grove is especially dear to Shri Baldev, who used to enjoy many games here with His younger brother Krishna and the sakhas. This unique kadamb-grove reminds one of Krishna and Dauji's innumerable pastimes. Even today, many saintly persons perform bhajan here. This place is situated exactly half-way between Nandganv and Javat. Being a place of Radha and Krishna's ras-lila, a platform has been constructed here in memory of this pastime.While grazing the cows in the afternoon, Krishna used to climb this kadamb tree and call Syamali, Dhauli, Pitambari, Kalindi and His other dear cows with His flute. Hearing Krishna's call, all the cows would assemble here immediately, and Krishna would count them on His jewelled necklace. If some cows were missing, He would again call out their names by sounding His flute, and only when they were all assembled would He return home with the herd.
Sometimes, in the gentle light of the full-moon night, Krishna would climb this kadamb tree and call the sakhis by playing their names on the sweet notes of His flute. These gopis would forget their bodies, minds and worldly cares, arriving to meet Krishna in a spell-bound condition. They would then perform rasa with Krishna, which was full of singing and dancing. Since Krishna climbed a kadamb tree and with His call (ter) gathered the cows and gopis here, this place is known as Ter-kadamb. There used to be many kadamb trees here, but they have all disappeared on account of stagnant rainwater. Great souls who perform bhajan here periodically plant kadamb trees at this place. On the day of Gopashtami, the Brajvasis bring small Brajvasi boys dressed like Krishna and Balram from Nandganv to this place and stage a programme of congregational singing called samaja. They also worship the cows beautifully and feed them grass and jaggery.